When a new asteroid or comet is first detected, astronomers don't know what kind of orbit it has, or how far away it is. Astronomers can report its position in the sky to the Minor Planet Center (MPC), which is sanctioned by the International Astronomical Union. There, astronomers use advanced computer programs to determine the object's orbit. 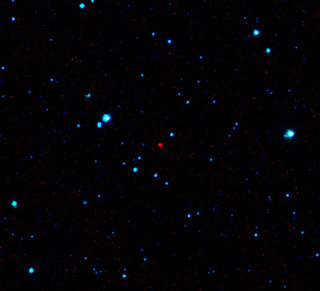 The infrared sky has fewer stars. The red dot at the center of this image is the first near-Earth asteroid discovered by NEOWISE. This particular asteroid, called 2010 AB78, is roughly one kilometer (0.6 miles) in diameter, and is currently about 158 million kilometers (98 million miles) away from Earth. The image shows three infrared wavelengths, with red representing the longest wavelength of 12 microns, and green and blue showing 4.6- and 3.4-micron light, respectively. The asteroid appears redder than the rest of the background stars because it is cooler and emits most of its light at longer infrared wavelengths. In visible light, this space rock is very faint and difficult to see.  At visible wavelengths, the sky is blazing with stars, but at the thermal infrared wavelengths NEO Surveyor will use, the stars are often much dimmer than the asteroids, making the asteroids easier to find.  Image credit: NASA/JPL-Caltech/UCLA.

Sometimes, there are too few observations to determine the orbit accurately. When this happens, the worldwide community of amateur and professional astronomers can step up to the plate. Telescopes -- from large, million dollar scientific marvels to smaller, backyard setups -- can be trained on the sky to acquire more observations of the object. Astronomers then send these observations to the Minor Planet Center, allowing knowledge of the orbit to be improved. In this way, the advanced computer programs used for calculating orbits get more and more accurate over time (~decades).

NEO Surveyorâ€™s Investigation Team, using survey data for discovered objects and orbits determined by the MPC, will calculate diameters, albedos, and impact frequencies for the objects. The impact probability, calculated from the orbit, is used to determine whether an object may be a threat to Earth.  The impact frequency is used to determine *when* the object may impact Earth.

Just as our team did with NEOWISE, the NEO Surveyor science data processing system will allow us to report observations of all potential asteroid discoveries to the Minor Planet Center soon after the images are collected. NEO Surveyor will observe each asteroid enough times over a long enough span of time to ensure that the objects can be recovered by other observers at the next possible observing opportunity from the ground. Once the observations are submitted to the Minor Planet Center, impact probabilities for each object will be automatically computed. In the event that a potential impactor is discovered, officials at NASA Headquarters will be immediately notified according to standard procedures already in place 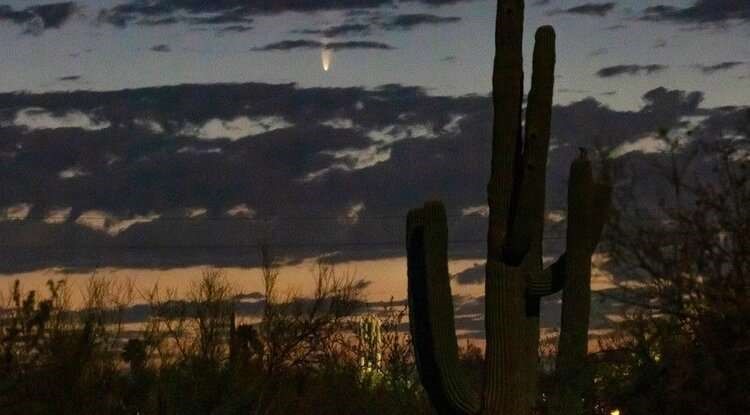 Comet NEOWISE captured on July 6, 2020 above the northeast horizon just before sunrise in Tucson.  Discovered on March 27, 2020 by the NEOWISE space telescope, Comet NEOWISE (or by its formal designation, C/2020 F3) brightened to the point of being visible in the night sky to the naked eye.  It was the brightest comet to approach Earth since Comet Hale-Bopp back in 1997.  Its closest approach to Earth occurred on July 22.  It is a long-period comet and will not visit Earth again for another 6,700 years.  Credit: Vishnu Reddy.