The NEO Surveyor Mission will be observing asteroids in the infrared - a range of wavelengths that cannot be seen by the human eye. A telescope operating at these wavelengths will be sensitive to warm objects, like asteroids whose surfaces have been warmed by the sun. 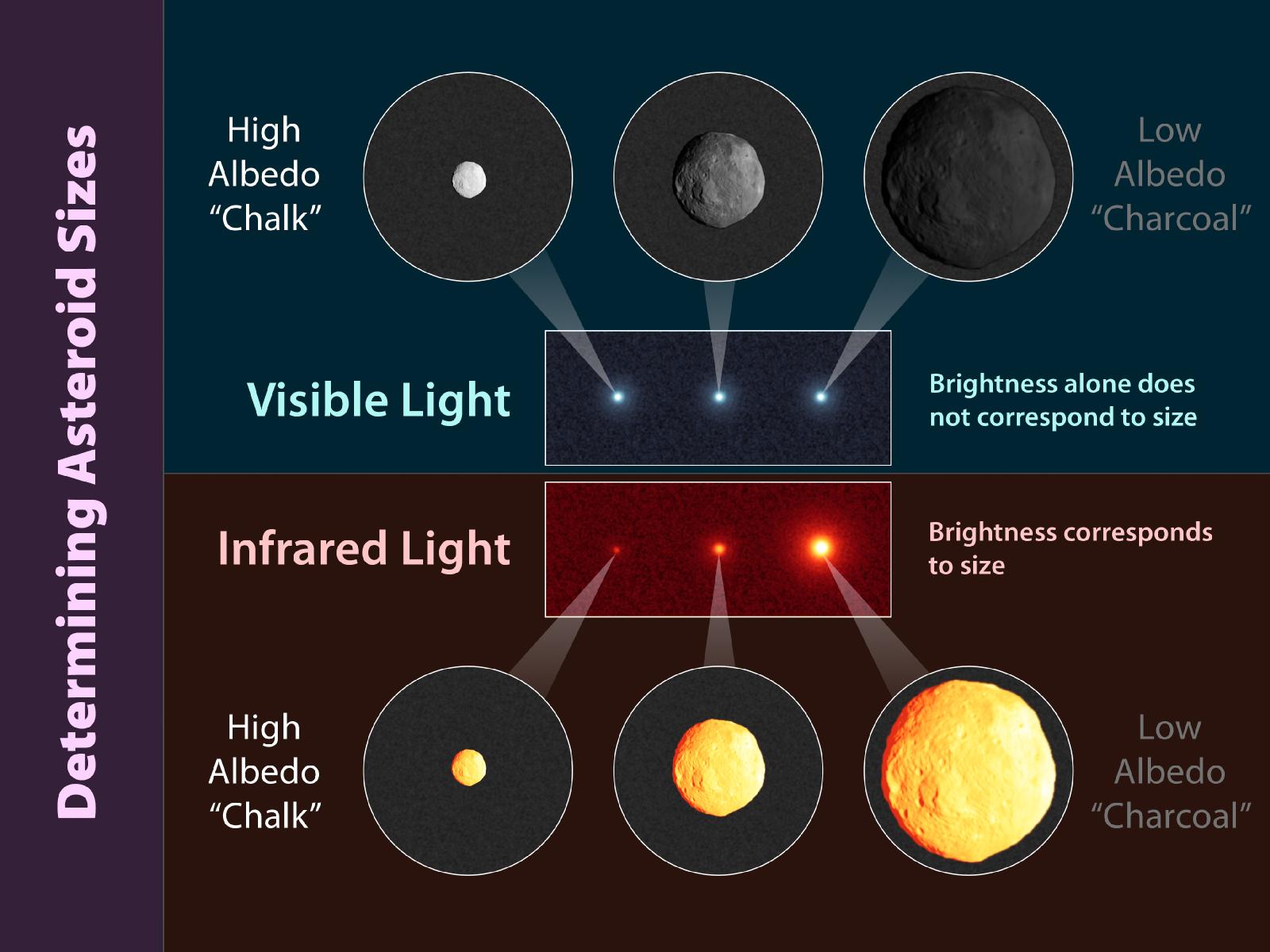 How to Tell the Size of an Asteroid. This chart illustrates how infrared is used to more accurately determine an asteroid's size. As the top of the chart shows, three asteroids of different sizes can look similar when viewed in visible-light. This is because visible-light from the sun reflects off the surface of the rocks. The more reflective, or shiny, the object is (a feature called albedo), the more light it will reflect. Darker objects reflect little sunlight, so to a telescope from millions of miles away, a large dark asteroid can appear the same as a small, light one. In other words, the brightness of an asteroid viewed in visible light is the result of both its albedo and size. The bottom half of the chart illustrates what an infrared telescope would see when viewing the same three asteroids. Because infrared detectors sense the heat of an object, which is more directly related to its size, the larger rock appears brighter. In this case, the brightness of the object is not strongly affected by its albedo, the measure of how bright or dark its surface is. When visible and infrared measurements are combined, the albedos of asteroids can be more accurately calculated. (Image credit: NASA/JPL-Caltech.)

If you look at the sky on a dark night, your eyes will see tens of thousands of stars. Although beautiful, these bright stars can act as camouflage, hiding the dimmer asteroids and comets we want to spot. However, look at the same night sky with a heat-sensing infrared camera, and many of the bright stars are filtered out, leaving the asteroids and comets clearly visible.

Ground-based surveys that scan the sky for hazardous asteroids in visible wavelengths are most sensitive to more highly reflective asteroids. Like someone wearing a white T-shirt at night, light-colored asteroids are easier for visible light telescopes to spot. Darker asteroids tend to be fainter at visible wavelengths, making them difficult to detect with this type of telescope.

Not only will NEO Surveyor be sensitive to dark asteroids, but infrared observations can also be used to make accurate measurements of an asteroid's size.  Unlike visible light telescopes, which have a tough time distinguishing between asteroids that are small but highly reflective and those that are large and dark, an infrared telescope can usually measure an object's effective diameter to within about 10%.

The infrared cameras on NEO Surveyor will need to be kept cold in order to function properly. Previous missions, such as WISE, relied on expensive cryogens for refrigeration. Cryogens limit the life of the mission -- once the cryogens are used up, the camera's usefulness decreases dramatically. NEO Surveyor sidesteps this issue by operating at the L1 Lagrange point and employing a sun shield, so that it can remain cool and cryogen-free throughout its five-year mission.