As of today, astronomers around the world (including amateurs, students, and professionals) have discovered about 9000 near-Earth objects (NEOs), nearly 600,000 Main Belt asteroids, and thousands of comets.

We now know that these numbers, large as they are, represent only a fraction of what is likely to exist.  Recent analysis of the NEOWISE data has shown that more than 90% of near-Earth asteroids larger than 1 km in diameter (large enough to have global consequences) have been discovered already.

However, only about 20-30% of asteroids as small as 100 m in diameter (about the size of a football field) have been discovered by astronomers so far. Objects in this size range, while not likely capable of causing global extinction events, could cause significant regional damage. The object that caused the 1908 Siberian Tunguska blast, which caused damage to a city-sized region, is thought to have been between 30-100 m in diameter.

Our recent results using the small sample of about 500 NEOs that we observed with NEOWISE suggest that there are somewhat fewer NEOs than previously thought to exist, about 20,500 objects larger than 100 m.  At sizes as small as 30-50 m, millions are predicted to exist. Of the 20,500 NEOs larger than 100 m, about 4700 are so-called potentially hazardous asteroids - objects with orbits that come particularly close to the Earth's orbit.

Our results suggest that the subset of NEOs that are most likely to cause impacts, the so-called potentially hazardous objects, are about twice as likely to occupy orbits in nearly the same plane as the Earth.  This may mean that they are more likely to impact the Earth. With NEO Surveyor, we can better quantify the risks of asteroid impacts simply by going out and discovering them. 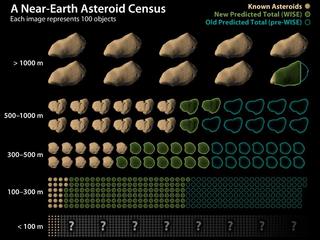 NEOWISE data have led to revisions in the estimated population of NEAs, but many remain to be discovered. The infrared-sensing telescope performed the most accurate survey to date of a slice of this population. This allowed the science team to estimate that 90% of NEAs larger than 1 km have been found. While the NEOWISE data reveal an approximately 44 percent decline in the estimated numbers of medium-sized asteroids, which are defined as those objects between 100 meters and 1,000 meters, most of these objects have yet to be discovered.  An advanced survey like NEO Surveyor would be required to find them. Image credit: NASA/JPL-Caltech